← back to
Magna Carta Records 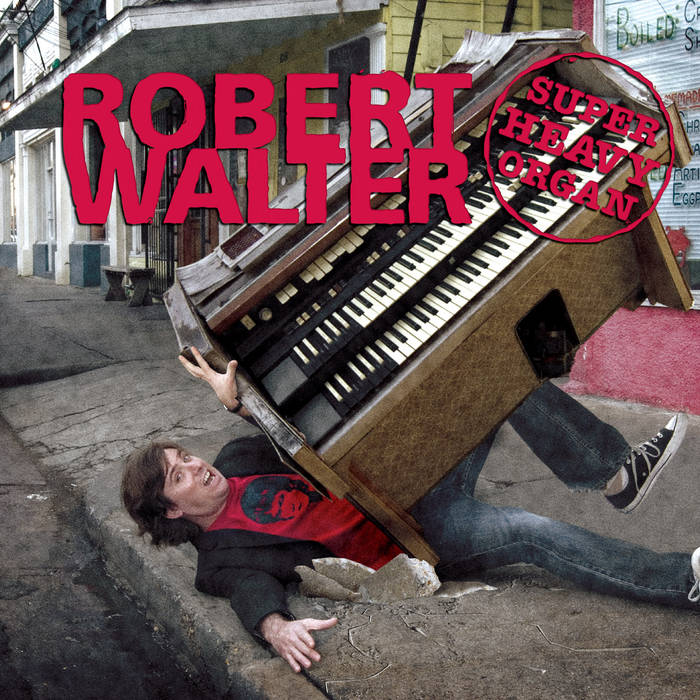 It’s a cross to bear, the Hammond Organ. You ask anyone who’s played one on the club scene and they’ll tell you horror stories about jacking the B3 up fire escapes or about removing doorframes, not to mention the sheer weight alone. No question, the Hammond is a super heavy organ, and you need a strong bass player!

Then there’s what’s under the hood. Talking about a mid-fifties B3, there are layers of keys, a twenty-five note pedal bass, four sets of draw bars, eighteen changeable presets—with, arguably a sound that smokes any modern instrument. You need a driver’s license to run it and you need a musician behind the wheel or, somehow, the Hammond doesn’t erupt in those fat, bubbly tones, or in those long glissandos that rip the paint off the wall.

“I just love the instrument,” Robert Walter enthuses. He knows the mantle he wears when he plays the Hammond and the Leslie. He knows the lineage, which, in no particular order, includes Jimmy Smith, Brother Jack McDuff, Jimmy McGriff, and new comers like Joey DeFrancesco. Walter wasn’t born behind an organ; in fact, he began gigging with piano and Fender Rhodes. But the story goes he wanted something more powerful, wider in bandwith—something heavier. The Hammond fit perfectly with the name of his band, and the name of this disk, Super Heavy Organ. No stranger to Magna Carta Records, Walter has also recorded with The Clinton Administration and has released Giving Up The Ghost.

Walter proves himself aware of the past, which he’s appropriated by means of oral history and by playing with key exponents. This is his route to originality, and what provides him with a contemporary edge. As he laments in the video interview (insert the CD in your computer), “Everybody’s playing the same shit in the same ways.” It’s not enough to play the same old voicings over the same old changes. It’s not enough just to play worn out funk. Of course, the task is easier when you’re surrounded with colleagues Skerik, Charlie Hunter, or the current crew.
Super Heavy Tracks
On Super Heavy Organ, Robert Walter is in able company as he constructs what he calls “soul jazz”. For one thing, there’s the rhythm section, culled from the finest of the New Orleans old and new guards: Johnny Vidacovich and Stanton Moore, respectively. Although they don’t join up on these tracks, they do perform together frequently under another banner. Then we have Tim Green, James Singleton, and Anthony Farrell, as competent as it gets on sax, bass, and vocals. But they deliver more than competence here. It’s more of a hardiness, a rollicking funk, done up in contemporary New Orleans style.

Stanton Moore owns up about the first track: “I’ve always enjoyed working with Robert. He’s a great player and a great writer. I always look forward to learning whatever new tunes he brings to the table. I learned ‘Adelita’ at the session and it’s become one of my favorite tunes to play live.”

Following “Adelita” is another number that almost plays itself: “Kickin’ Up Dust”, with its compelling ascending progression, all optimism and adrenaline. It’s a truly (to use a well-worn phrase that applies to all of these tracks) heavy groove.

“Spell” is pure soul. This is universal. This could be Willie Mitchell in Memphis; this could be the Nevilles or even Galactic in New Orleans. Farrell’s role is significant, his quiet vocal refrain evoking a haunting mood.

Check out the count in on “El Cuervo”: “one, two, three for you”. The song, which is in three or in six, is a forum for stretching out. When it graduates into a jazz vamp to underscore Tim Green’s solo, Johnny V. reveals himself as the consummate bop drummer, alternately teasing us with chunks of funk.

“Criminals Have a Name for It”. Indeed! Robert is favoring the bottom register of the acoustic piano, using the low keys to demark a sort of Gulf Coast clave, juxtaposing thick organ tones over top.

Another count in to make you cock an ear, then we’re into the jazzy “34 Small”, another tune in three, against which Walter is, pardon the pun, pulling out all of the stops, soloing with eighths, sixteenths, and thirty-second note clusters. All the while, the pulse and the energy magnify.

Preceding “Don’t Hate, Congratulate” (love these titles), we hear more in-studio instructions on how to navigate the intro. This a bouncy little track with a rock steady rhythm section.

We kid you not, next up is a later period Zeppelin tune, “Poor Tom”. The only cover on the album, this is not shtick, by any means. If anything, it’s as credible as the original version.

“Smells like Dad’s Drunk Again”, a nod to Nirvana. Harmonically and rhythmically this is one of the more bizarre—and satisfying—tracks on Super Heavy Organ.
Tim Green is absolutely in his element negotiating these changes. He just builds and builds against the gritty Hammond and the cushion of ride cymbal and toms.

“Big Dummy” is gut bucket funk, unflinching in its plodding yet vibrant groove. Walter hauls out the distortion and the whole thing reeks of dirt. Beautiful.

If “Dummy” plodded, “Hardware” is positively anchored. It’s a punishingly slow rocker with shuffle tendencies lurking not so far below the surface. Walter nails it, refusing to rush. He opens up his keyboard palette when necessary, then shuts it down again. This is an example of absolute restraint.

It’s out on a jazz note with “Cabrillo”, a bouncing 6/8 tempo—or so it begins, before accents tear it up. With its eerie and foreboding changes, this is arguably the track that transports us to the great Hammond organ trios of the past. This is all about listening, reacting, and stretching out. If this were the early seventies vinyl, this would be the song that took up most of side two. It’s brilliant enough from the get go…and then it starts its build! When it finally comes down to a whisper, and the Hammond’s in the reeds, it works magic. And there’s dark magic a plenty on this album.

A founding member of the seminal groove band The Greyboy Allstars, organ, keyboard and synth sharp-shooter Robert Walter splits his time between his own 20th Congress, Greyboy, and a robust film soundtrack career in Los Angeles.

Bandcamp Daily  your guide to the world of Bandcamp

Featured sounds by K.Spark and WIZDUMB, plus Basi joins the show to discuss his latest release.