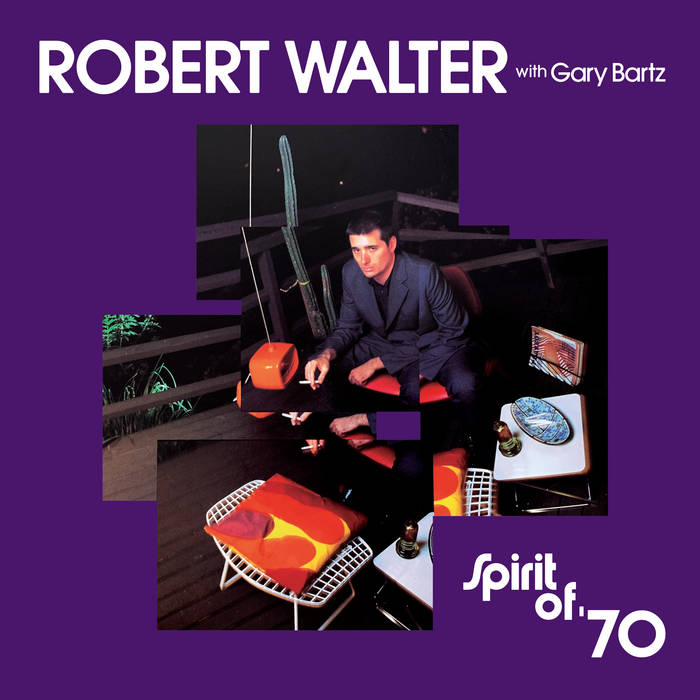 Robert Walter's classic 1996 debut album 'Spirit of '70' was the second in a planned series of solo albums by individual members of The Greyboy Allstars—the band whom Walter co-founded and has played keys for the last 25+ years alongside saxophonist Karl Denson, guitarist Elgin Park, bassist Chris Stilwell and drummer Zak Najor. Declared by JazzTimes as “can’t miss funk" at the time of its release, the concept for the collection was to emulate the rotating personnel of the Blue Note and Prestige labels where a cast of musicians would take turns as a leader, drawing on the others as sidemen. Each album would also feature a guest from the previous generation that had been influential to The Greyboy Allstars' sound. For ’Spirit Of ’70,’ legendary alto saxophonist Gary Bartz joined the line-up.

"We loved the 'Harlem Bush Music' albums by Gary Bartz,” says Walter. "Somehow the idea became to have Gary on the next record, which would be mine to lead. He was a hero for us because of his lucid improvisations, deep connection to blues and heavy spiritual vibe. My contributions to The Greyboy Allstars at the time had been tending more strange and meditative, so it seemed like a great fit."

The sessions took place over a few days in producer DJ Greyboy’s living room turned studio. Recording in a non-traditional space helped to create a relaxed atmosphere and forced Walter and company to play closely together without much isolation. You can hear the front door open at the beginning of “Impervious" by someone unaware that a take had begun. Elgin Park’s guitar on the album was recorded through a Caliphone portable record player in place of an amplifier. Aside from instruments and recording gear, the house was filled with mid-century furniture and thousands of records. The cover photos were taken in the same space as the recordings.

"We had been touring heavily at the time so the band had an easy chemistry, but this was my first album as a leader, so I was both nervous and star struck by the presence of Gary Bartz,” remembers Walter. “Before long the tension eased and the recording was fun and loose. I remember Gary playing one great solo after another while we just tried to get a mistake free take behind him. I learned from the sustained flow of invention in Gary’s playing. It made me want to become a better and more true improvisor. He helped to elevate the music beyond just a throwback funk tribute. This was art being created in real time and in the present. That early inspiring experience did a lot for my confidence as a composer and arranger."

The majority of the material recorded for ’Spirit of ’70' had been part of The Greyboy Allstars live repertoire with Elgin Park, Chris Stilwell and Zak Najor all receiving writing credits, while two of Robert Walter’s compositions “Impervious" and “Palilalia" were written specifically for the album. Two tasty covers were additionally served up: "Jan Jan,” a song written by organist Mose Davis of underground Detroit funk stalwarts The Fabulous Counts and "Little Miss Lover,” the Jimi Hendrix gem, which nods to the soul jazz tradition of reimagining popular songs from the rock music canon. Alternating between an array of vintage keyboards, including Fender Rhodes, Wurlitzer, Hammond B3 organ, Clavinet and Mini Moog, Walter leads the band through a supremely inspired set of soul jazz, boogaloo and rare groove. As its title implies, 1970s-inspired funk, in all of it varying colors and forms, burns off the grooves. It’s audibly apparent that the music is being born again in the capable hands of a new generation. Walter and company’s youthful exuberance propels the record with a wide-eyed, fast and loose innocence as elder statesman Gary Bartz clearly gives his blessing to these 20-something funk purveyors to assume the mantle.

"I remember making this album as a highlight of the early days of The Greyboy Allstars,” concludes Walter. "I think it captures the band right as it is beginning to establish its own identity. We are taking the lessons learned from emulating the records we love and starting to create something unique. I’m still very proud of this one."

A founding member of the seminal groove band The Greyboy Allstars, organ, keyboard and synth sharp-shooter Robert Walter splits his time between his own 20th Congress, Greyboy, and a robust film soundtrack career in Los Angeles.

Bandcamp Daily  your guide to the world of Bandcamp

Featured sounds by K.Spark and WIZDUMB, plus Basi joins the show to discuss his latest release.